Were the atomic bombings of Hiroshima and Nagasaki "necessary" to end the Pacific War? Of course not. In a causal or logical sense, they would have been necessary if, and only if, the war could not have ended had the bombings not occurred. That was clearly not the case, and thus the bombings were obviously not "necessary".

Having disposed of that question, a more interesting question suggests itself: Were the atomic bombings the most humane way to end the war? The United States Strategic Bombing Survey (USSBS) suggested, in hindsight, that Japan would probably have surrendered, under blockade and continued conventional air attack alone, in late 1945 (Summary Report, p.26):


Based on a detailed investigation of all the facts, and supported by the testimony of the surviving Japanese leaders involved, it is the Survey's opinion that certainly prior to 31 December 1945, and in all probability prior to 1 November 1945, Japan would have surrendered even if the atomic bombs had not been dropped, even if Russia had not entered the war, and even if no invasion had been planned or contemplated.


Taking that hindsight as a fact still does not tell us whether prolonging the war with blockade and continued conventional air attack would have been more humane than ending it promptly with the atomic bombings. That is the question to be examined here.
BACKGROUND

Prior to the Yalta conference, FDR and Churchill met with their Combined Chiefs of Staff at Malta, January 30 to February 3, 1945, planning the final western offensives against Germany. There, the Combined Chiefs of Staff estimated that victory over Germany would come between July and December. Victory over Japan would take another year and a half, coming, hopefully, in 1947.

The projected final offensives against the Japanese islands would require shifting entire armies from Europe to the Pacific. Given concern that Japanese forces in China and elsewhere would fight on, even after an invasion of the home islands, Russia's entry into the Pacific war was desirable (in a testament to the dementia of Axis strategy, Japan and Russia were not at war). Accordingly, at the Yalta Conference in early February, in return for regaining its losses in the Russo-Japanese War of 1904-5 and other concessions, Stalin agreed to attack Japan two to three months after the end of the war in Europe.

The atomic bomb was largely out of calculation at this point, being viewed by FDR and Churchill as simply a large bomb. It was not known whether it would work, and if it did, what its explosive yield would be. FDR died on April 12 and never knew. Truman knew after the Trinity test on July 16. At the Potsdam conference a few days later, he informed Stalin of the successful test. Stalin (who already knew about the bomb from his espionage network) said he hoped the weapon would soon be used against the Japanese. While hopeful that the bomb could bring a rapid end to the war, Truman did not view it as a sure thing, and was happy when Stalin renewed his Yalta promise to enter the war against Japan. This would come on August 8, three months after the end of the war in Europe. With Japan's long-term situation hopeless, and wanting to avoid unnecessary casualties on all sides, the leaders issued a call for surrender in the Potsdam Declaration.

Japan ignored the Potsdam Declaration, and the only two atomic bombs the U.S. had available were dropped on August 6 and 9, in quick succession, to deceive the Japanese into thinking the U.S. had an abundant supply. It did not. A third bomb was under construction, but additional bombs would have taken months to complete. Had the first two not proved decisive -- as they very nearly did not, given the strong resistance to surrender even after their use -- the campaign of conventional warfare would have continued. The consequences of this protracted campaign on Allied and Japanese forces, and on civilian populations in Japan and areas under Japanese occupation, would have been dire.

Even after the atomic bombings and Russia's entry into the war, the Imperial Council was deadlocked 3-3 on surrender, and it was Hirohito's intervention (the first by an emperor since 1895) that broke the tie. Still, it took five days (and the threat of a military coup that would have continued the war) for Japan finally to communicate clear acceptance of surrender terms. Much has been written on this and there is no need to recap it here, except to cite this passage from the Imperial Rescript that Hirohito recorded for broadcast to the nation at noon (Japanese time) August 15:


Moreover, the enemy has begun to employ a new and most cruel bomb, the power of which to do damage is, indeed, incalculable, taking the toll of many innocent lives. Should we continue to fight, not only would it result in an ultimate collapse and obliteration of the Japanese nation, but also it would lead to the total extinction of human civilization.

The deception had worked. Convinced the United States was sitting on a hoard of atomic bombs, and would continue to use them, Japan surrendered.

The best antidote to the tunnel vision exhibited by those who criticize the use of the atomic bombs is to consider the probable consequences of prolonging the war under the scheme of blockade and continued conventional air attack envisioned by the USSBS:


1. Japanese military and civilian casualties resulting from continued air attack.
The Survey's pet scheme was to interdict transportation. It believed this would have "reduced Japan to a series of isolated communities, incapable of any sustained industrial production, incapable of moving food from the agricultural areas to the cities, and incapable of rapid large-scale movements of troops and munitions." (Summary Report, p. 19).

In addition, the Survey said, "In order to bring maximum pressure on the civilian population and to complicate further the Japanese economic problems, night and bad weather attacks on urban areas could have been carried out simultaneously with the transportation attack." (Summary Report, p. 20)

Given that 185,000 casualties were sustained during the first Tokyo attack on 9 March 1945 (Summary Report, p. 20), it seems likely that direct casualties from continued conventional bombardment would have exceeded those caused by the atomic bombs.


2. Japanese civilian casualties from malnutrition and disease.
"The average diet suffered even more drastically from reductions in fats, vitamins and minerals required for balance and adversely affected rates of recovery and mortality from disease and bomb injuries. Undernourishment produced a major increase in the incidence of beriberi and tuberculosis." (Summary Report, p.21)

Obviously significant casualties would have accrued, had the war been prolonged several months, from malnutrition and disease. (Antibiotic treatment for tuberculosis and other bacterial infections was not available to Japanese civilians at that time.)


3. Japanese military casualties in bypassed areas.
"In the Central Pacific, many of the islands the Japanese expected us to attack were bypassed, and the garrisons left to wither and die. Survey examination of the bypassed islands in the Pacific and interrogation of the Japanese survivors confirmed their intolerable situation. Their planes and ground installations were destroyed by air attack. Cut off from any supplies or reinforcements, except occasionally by submarine, their food ran out. On certain of the islands, Japanese actually ate Japanese." (Summary Report, p. 13)

Prolonging the war would have resulted in even greater suffering for these soldiers, and for any civilians unfortunate enough to be on the same islands.


4. Civilian casualties in Japanese-occupied areas.
Vast areas of China, Korea, Indochina, and Indonesia were still under Japanese occupation at the time of surrender (see map at bottom of page). Civilians in these area were systematically starved, beaten, shot, beheaded, gassed, infected (germ warfare) and tortured.

"From the invasion of China in 1937 to the end of World War II, the Japanese military regime murdered near 3,000,000 to over 10,000,000 people, most probably almost 6,000,000 Chinese, Indonesians, Koreans, Filipinos, and Indochinese, among others, including Western prisoners of war." See R. J. Rummel, Statistics of  Democide, ch. 3, for details.  (For printed or Kindle version, see Amazon).


5. Allied (U.S., British, Russian) military casualties.
Although those who criticize the use of the atomic bombs seem not to care at all about Allied military casualties, the result of continuing the war for several additional months would have been substantial casualties -- from combat, tropical diseases, accidents and losses at sea.


6. Opportunity cost of continuing the war.
War is a very expensive business for both sides, consuming resources in destruction and killing that would otherwise be spent in building and living. Extending the war's duration would have squandered resources that could have been spent in humane pursuits. Like feeding starving populations in Europe and Asia, for example.


All of which strongly suggest that ending the war promptly with the atomic bombs was more humane than a protracted conventional campaign, whether the scheme proposed by the USSBS, or any other conventional option.

It is occasionally suggested that the real aim of the atomic bombings was to terrorize the Russians. This argument is made by people who think it is only possible to have one single, pure, unmixed motive for doing anything. It would be more accurate to say terrorizing the Russians was viewed as an incidental benefit. But they weren't terrorized anyway, since they were fully aware of the U.S. atomic bomb project, already had their own project under way, and had their first successful test in 1949 (well in advance of the 20 years General Groves said it would take them).

There is a widespread but erroneous belief that in August, 1945 the Japanese were huddled on the home islands totally surrounded and beleaguered, when in fact they still controlled vast areas occupied by millions of people who were being systematically brutalized. This map shows the situation on 14 August, 1945: 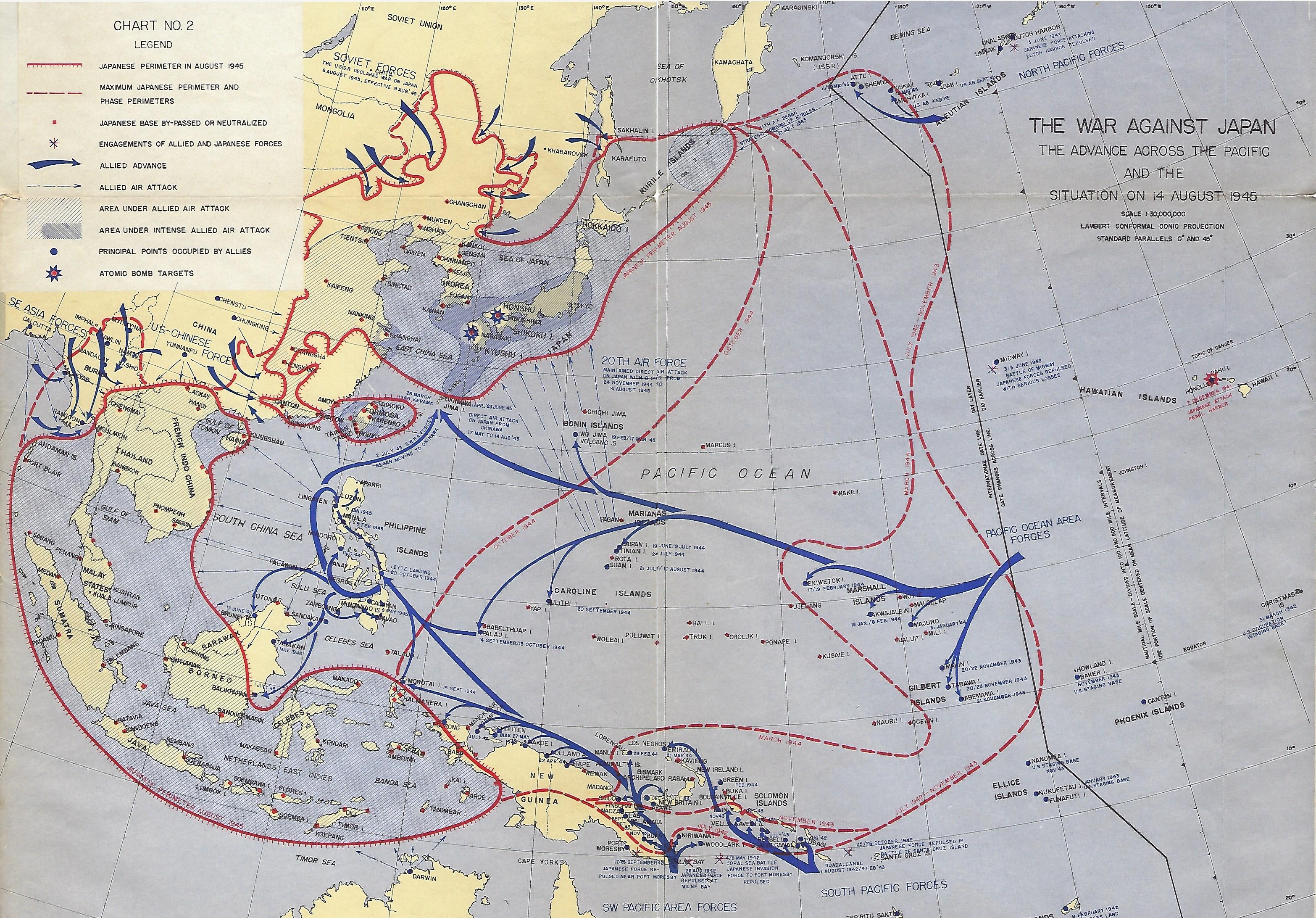 (Or just click here to view the full-size image in a new tab.)